By Jennifer Maldonado and Lillie Gissen

This may be hard to believe, but it’s officially been six years since Girl Meets World premiered. Yep, the Disney Channel show first hit screens on June 27, 2014, and fans cannot believe how fast time has flown by! It seriously feels like just yesterday that viewers watching Rowan Blanchard, Sabrina Carpenter, Peyton Meyer, August Maturo, Corey Fogelmanis, Ben Savage and Danielle Fishel on their TV screens, and there’s not a day that goes by that they don’t miss it, TBH.

In honor of the anniversary, J-14 decided to investigate and we uncovered a ton of hidden behind-the-scenes secrets that fans probably didn’t know about the series! For example, fans may be shocked to learn that Rowan didn’t even want to be a part of the show at first! We almost had an entirely different Riley Matthews — could you imagine how different it would have been?  Oh, and some people may not have realized that Riley was supposed to have an older brother named Elliot played by Teo Halm, but the character was later dropped from the series. Yeah, there’s actually a lot that went down when the cameras stopped rolling.

Want to learn some more unknown facts about the series? From actors who were originally supposed to play different characters to scenes that were completely changed, scroll through our gallery uncover some more Girl Meets World behind-the-scenes secrets!

Everyone is so used to seeing Sabrina and Rowan as Maya Hart and Riley, but originally, the two stars were supposed to play each other’s parts! OMG.

In an interview, the actress explained that she went on about eight auditions to snag the part and during the second set of auditions, she and Sabrina swapped roles. And the rest is history.

There’s an alternate episode where Maya and Lucas kiss

Every GMW fan knows how epic the “Girl Meets Texas” episode was, and although Maya and Lucas Friar didn’t kiss in the campfire scene that aired, it turns out, there was actually an alternate version filmed where they did share a smooch.

The writers of the show revealed via Twitter that they “felt it was better for where the story was going.”

In GMW, Corey’s character, Farkle Minkus, was the son of the OG Boy Meets World character, Stuart Minkus. But fans may be shocked to learn that wasn’t the original plan! When Corey first started filming, he tweeted that his character’s name was actually Shamus Farkle.

@celinepuki I will be playing Shamus Farkle!

And in an interview, Corey explained that he didn’t find out who his fictional dad really was until halfway through the filming of Season 1.

There was supposed to be another Matthews child

Teo shared the shocking news via Twitter, writing, “So guys, Disney decided that it wouldn’t work to have an older brother on the show; I won’t be on Girl Meets World. Thank you to everyone.”

Could you imagine how diff the show would be with another Mattews sibling?! 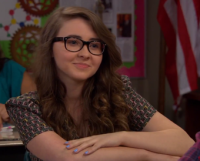 Ever notice a girl with brown hair and glasses who kind of looks like Maya in certain scenes? Well, it’s none other than Sabrina’s real-life sister, Sarah Carpenter, who guest starred a student named Sarah. Who knew?!

Rowan didn’t want to star in the show at first

Rowan admitted that she never really had any intention of ever being on a Disney Channel show, so almost wasn’t cast as Riley.

“My agent sent over Girl Meets World. I was like, ‘I will not do Disney ever in my life.’ I watched Disney, but I thought that if you wanted to be a serious film actress then you couldn’t be a Disney actress. Which is partially true — I do have to work harder to be taken seriously,” she said to The Edit.

Once she snagged the role however, she realized she now had such a great platform to do some amazing work.

“We started thinking about what it could be like if we made this show that was funny for kids, but was also teaching them something. Then, when I started discovering activism, I think it made the show that much better, because we were really getting into these topics, having conversations… If I didn’t like something I would talk to [the writers] about it. It was nice to feel heard and to be respected in a way that I didn’t necessarily feel on a lot of sets that I’d worked on previously,” Rowan explained.

Looking Back Sabrina Carpenter Recalls Her Time On The 'Girl Meets World' Set: 'That Was My Childho...

Investigating What Is the Cast of 'Girl Meets World' Up to Now?